Sometimes you have parts of a flow that you only want to run under certain conditions. To support this, Prefect provides several built-in tasks for control-flow that you can use to add conditional branches to your flow.

Let's say you want to have a flow where different tasks are run based on the result of some conditional task. In normal Python code this logic might look like:

To implement the same logic as a Flow, you can make use of Prefect's case blocks. Tasks added to a flow inside a case block are only run if the condition matches the case. Tasks in branches that aren't run will finish with a Skipped state.

We'll also need Prefect's merge function to merge the branches together before the another_action task. This function takes one or more tasks conditional tasks, and returns the output of the first task that isn't Skipped. This can be used to "merge" multiple branches in a flow together. If the results of action_if_true/action_if_false weren't needed later on in the flow, we wouldn't need this step. 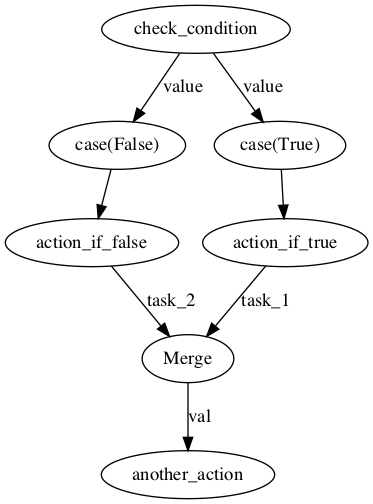 This example can be registered in Prefect Cloud or Server by running:

(to register in a different project, replace 'Prefect Examples' with your project name).

The flow source is available on GitHub here.